WASHINGTON, D.C. (November 29, 2018) -- The Corporation for Public Broadcasting (CPB) and PBS today announced that 14 public media stations will each receive two-year, $175,000 “Ready To Learn Community Collaboratives for Early Learning and Media (CC-ELM)” grants to support science and literacy learning for children, families and caregivers in low-income communities. The grants are part of the Ready To Learn Initiative, funded by the U.S. Department of Education to support early learning for underserved children.

The 14 stations will work closely with partner organizations in their communities to maximize the impact of PBS KIDS science and literacy-based programming, apps and digital games from trusted series, including “Ready Jet Go!” and “The Cat in the Hat Knows a Lot About That!” The grants will support professional development for educators and training for facilitators and caregivers in best practices to engage families and children to learn together about scientific inquiry and literacy through digital media. 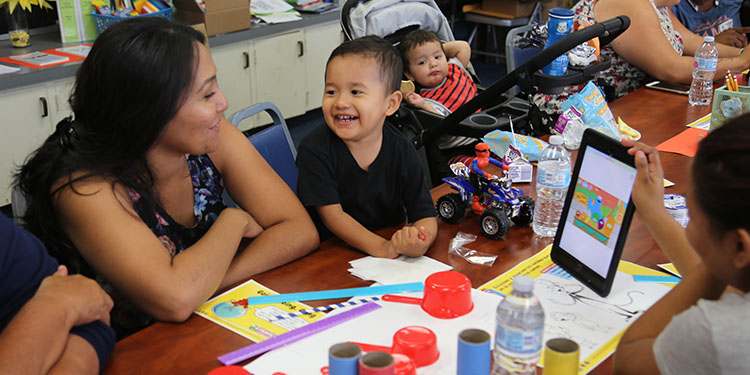 Ready To Learn Community Collaborations for Early Learning and Media grants will support stations as they partner with organizations in their communities to support science and literacy learning. Photo courtesy of PBS SoCal.

“Public media’s high-quality children’s content has proven effective in helping our youngest learners make academic gains and experience social-emotional growth to get on the right track for school,” said Deb Sanchez, CPB’s Senior Vice President of Education and Children’s Content. “Through these grants, public media will provide engaging learning opportunities – for free, anytime and anywhere – for all children and families, especially those living in low-income communities.”

Stations awarded the newest round of grants include:

Examples of station work with local partners to engage low-income families and other communities with the greatest need include:

These resources are being provided pursuant to a five-year grant awarded to CPB and PBS through the U.S. Department of Education’s Ready To Learn Initiative. The Initiative was created to advance new tools supporting personalized and adaptive content for children and parents, establish a network of community collaboratives and conduct efficacy research on the educational resources provided.

About CPB
The Corporation for Public Broadcasting (CPB), a private, nonprofit corporation created by Congress in 1967, is the steward of the federal government’s investment in public broadcasting. It helps support the operations of more than 1,500 locally owned and operated public television and radio stations nationwide. CPB is also the largest single source of funding for research, technology and program development for public radio, television and related online services. For more information, visit cpb.org, follow us on Twitter @CPBmedia, Facebook, and LinkedIn and subscribe for updates at cpb.org/subscribe.

About PBS KIDS
PBS KIDS, the number one educational media brand for kids, offers children ages 2-8 the opportunity to explore new ideas and new worlds through television, digital media and community-based programs. PBS KIDS and local stations across the country support the entire ecosystem in which children learn, including their teachers, parents and community. Provided by stations, the free PBS KIDS 24/7 channel and live stream is available to more than 95% of U.S. TV households. Kidscreen- and Webby Award-winning pbskids.org provides engaging interactive content, including digital games and streaming video. PBS KIDS offers mobile apps to help support young children’s learning, including the PBS KIDS Video app, which is available on a variety of mobile devices and on platforms such as Roku, Apple TV, Amazon Fire TV, Android TV and Chromecast. PBS KIDS also offers parent and teacher resources to support children’s learning anytime and anywhere. For more information on PBS KIDS content and initiatives supporting school readiness and more, visit pbs.org/pressroom, or follow PBS KIDS on Twitter, Facebook and Instagram.

About The Ready To Learn Initiative
The Ready To Learn Initiative is a cooperative agreement funded and managed by the U.S. Department of Education's Office of Innovation and Improvement. It supports the development of innovative educational television and digital media targeted at preschool and early elementary school children and their families. Its general goal is to promote early learning and school readiness, with a particular interest in reaching low-income children. In addition to creating television and other media products, the program supports activities intended to promote national distribution of the programming, effective educational uses of the programming, community-based outreach, and research on educational effectiveness.