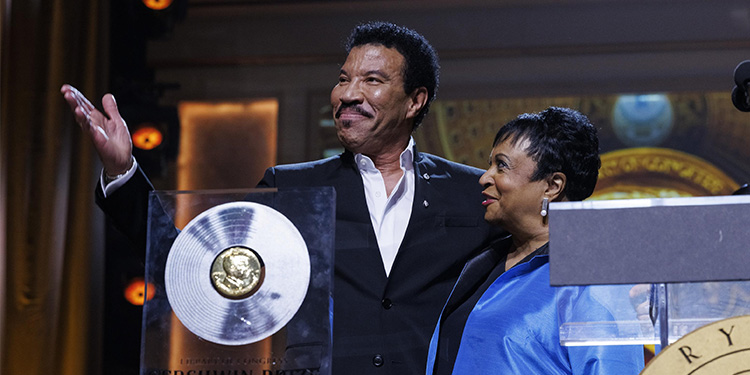 With former Gershwin Prize honoree Gloria Estefan performing “Dancing on the Ceiling” to open the festivities, Lionel Richie received the 2022 Gershwin Prize for Popular Song at a gala taped recently at Constitution Hall. The celebratory concert airs at 9 pm Tuesday, May 17, on PBS (check local listings), streaming on PBS.org and on the PBS app.

The Tuskegee, Ala., native, who has sold more than 125 million albums worldwide and has won an Oscar, a Golden Globe and four Grammys, said his message was that love is the only answer. “I travel the world, and all people really want me to say is ‘I love you,’” he said. “All they want to hear is, ‘I love you.’ … ‘I love you’ is forever, the only words the world wants to hear. And the day we realize we’re a family, and not a tribe … the day that happens, we will clearly be united, together, as one.”

The Library of Congress Gershwin Prize for Popular Song is bestowed in recognition of the legendary songwriting team of George and Ira Gershwin to celebrate the work of artists whose careers reflect their influence, impact, and achievement in promoting song as a vehicle of musical expression and cultural understanding. The honoree is selected by the Librarian of Congress in consultation with a board of scholars, producers, performers, songwriters, and other music specialists. Previous recipients are Paul Simon, Stevie Wonder, Sir Paul McCartney, songwriting duo Burt Bacharach and the late Hal David, Carole King, Billy Joel, Willie Nelson, Smokey Robinson, Tony Bennett, Emilio and Gloria Estefan, and Garth Brooks.