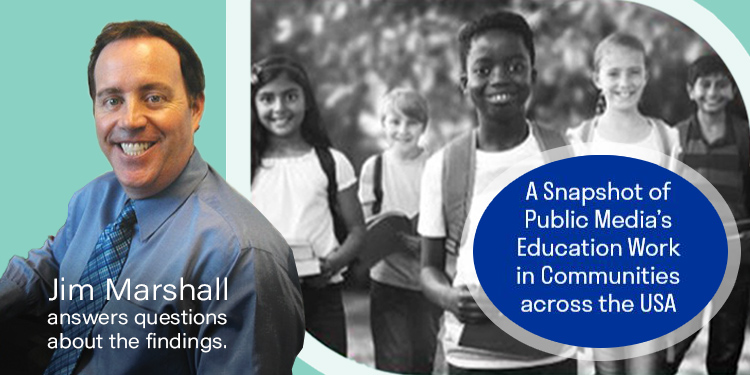 Public media stations have long used their unique blend of local/national content and community partnerships to fulfill their educational mission. However, the global pandemic has increased their challenge and intensified their work, according to a 2020 Survey of Station Education Work commissioned by the Corporation for Public Broadcasting (CPB).

CPB caught up with Dr. James Marshall of San Diego State University, who conducted both surveys, to discuss his work.

Q. What did the survey find about the unique role that stations play in their communities?

A,  The 2020 Station Survey helped CPB create a snapshot of public media’s current education work. We documented the audiences most frequently targeted by public media’s education work, as well as the delivery technologies and formats employed. Public media professionals rely heavily on community partners of many types, and these partnerships are responsible, in part, for public media’s rapid response and successful contributions to virtual learning at the start of the COVID-19 pandemic.

Part of what makes public media’s education work successful is the alignment with demonstrated community needs and the use of strategies that hasten predictable results. We found large numbers of stations applying high-impact, results-focused strategies that include intentionally targeting audiences through partnerships, including stakeholders in the design and implementation of their education programs, and basing their education efforts on needs assessment data.

Q. How does the current picture of stations’ work supporting learning in their local communities compare with previous survey efforts in 2008 and 2015?

A. Each survey investigated topics relevant to the time it was fielded, so the time period between surveys has proven challenging. However, we have seen growth over time in the percentage of stations using key strategies, including conducting needs assessments to better understand their communities and prioritize their efforts, and collecting data to measure impact. Finally, partnerships. They’re central to the education work of most public media stations. We have seen increases in both the number of partnerships and how crucial partnerships are perceived  over time.

The percentage of public television stations and joint licensees partnering with schools, colleges or universities, and public libraries all increased from 2008 to 2020.

Q. In both surveys, what differences did you find between public television stations and public radio stations?

First, the stations differed in the audiences they targeted with their education efforts. Television/joint stations were more likely to prioritize young children and their parents, while radio stations prioritized grandparents and parents of children.

Another area of difference was content. Radio stations most frequently targeted arts and journalism content as part of their education work, while television/joint stations most frequently targeted Science, Technology, Engineering, and Mathematics (STEM) and literacy-focused content (page 12). When it comes to producing or adapting (localizing) content, we found that television/joint stations were more likely to adapt national content in their education work, while radio stations were more likely to produce content from scratch (charts pages 14 and 15). However, I should mention that perspective here about what is easier to produce, and perceptions around value of the content, did vary quite a bit within each group.

Q. How did stations adjust their work as result of the COVID-19 pandemic? Why was it so important to capture these shifts in a follow-up survey?

A. We had heard that stations were broadcasting educational content to help keep students learning when their schools had to shift to remote learning during the pandemic. Our survey results confirmed this important gap that public media helped to fill. But there were some additional findings that stood out. Partnerships expanded considerably during the first few months of the pandemic as stations developed and deepened their collaborations. This was especially true for partnerships with local- and state-level education agencies.

Public media stations have increased partnerships in response to the coronavirus pandemic.

The education response to COVID-19 required many stations to reallocate resources. Programming schedules shifted to accommodate additional core education content. Human resources shifted too. Many stations shared an “all-hands-on-deck” sort of effort, where people who didn’t traditionally have a role in their station’s education work were now supporting exactly that. This contributed to public media’s rapid and successful efforts to meet virtual learning needs in communities across the United States. That success has many stations reflecting on their capacity as a result of swiftly doing new things. I personally hope the momentum we perceive through the data will benefit system innovation into the future. With 90% of television/joint stations telling us their COVID-19-caused changes to the way their work will persist, at least to some degree, in this new era, I’m optimistic.