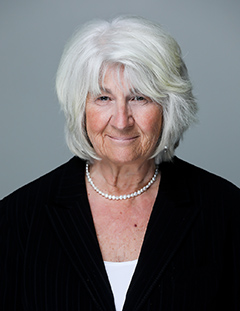 Rubydee Calvert was appointed to the CPB Board of Directors by President Donald Trump and confirmed by the Senate in May 2018.

Ms. Calvert retired from Wyoming PBS in August 2015, where she served as the General Manager of the station and the President of the Wyoming PBS Foundation (2006-2016). Prior to becoming General Manager, she was the Director of Programming for 24 years, and supervised the departments of production, promotion, and education services, leading the production team to produce the station’s signature series Main Street, Wyoming in 1990. This series continues today – and has archived 225 programs on the history and culture of Wyoming. Ms. Calvert was the executive producer for several documentaries that were distributed nationally and produced and hosted many local public affairs programs and election debates. She also supervised the education initiatives Teacherline and Ready To Learn, serving on their national advisory boards.

While working as the general manager,  Ms. Calvert handled all governmental affairs efforts for the station and was successful in working with Wyoming governors and the State Legislature to acquire three additional staff positions (2007), a $1.5 million endowment grant for station production (2008), $1 million grant to upgrade the station production truck to high definition (2009-10), and a grant to produce online Native American education modules for Wyoming schools (2014). She received the National Advocacy Award from APTS in 2013 for her work with the Wyoming Congressional delegation.

Ms. Calvert served two terms on the national PBS Board (2008-2014), where she also served on PBS’ Station Services, Interconnection, National Policy Advisory and Station Diversity committees. Governor Geringer appointed Calvert to the Wyoming State Board of Education (2000-2006), which she chaired for two years. Prior to that she served and chaired the Riverton Memorial Hospital Board (1996-2000) and was as an officer of Riverton Rotary for six years.

Ms. Calvert is a member of the Board of Trustees of the Buffalo Bill Center of the West in Cody, Wyoming and chairs the Education and Interpretation Advisory Committee. She was elected to the Board of Directors of America’s Public Television Stations in January 2017 and serves on U.S. Senator Mike Enzi’s committee for military academy appointments.

Ms. Calvert has a BA in English, Secondary Education from the University of Wyoming; she has completed post graduate work in the Master of Public Administration program from the University of Wyoming and completed two years of broadcasting classes at Central Wyoming College, where she also taught production classes. She has three children, Chad, an attorney who works in Denver, Kara who works in governmental affairs in Washington, D.C., and Chris, a petroleum engineer who works in Dallas.