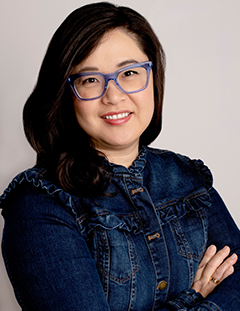 Kathy Im was appointed to the CPB Board of Directors by President Joseph Biden and confirmed by the Senate in December 2022.

Ms. Im is the Director of Journalism and Media at the John D. and Catherine T. MacArthur Foundation. She manages one of the nation's largest and longest running philanthropic portfolios focused on public interest journalism and media. During her tenure, the program has deepened and expanded its investments in the creation, dissemination, and amplification of accurate, just, and inclusive news and narratives across three areas of media – Professional Nonprofit Reporting, Nonfiction Multimedia Storytelling, and Participatory Civic Media.

Ms. Im is a recognized leader in philanthropy and media and the author of several editorials and essays about press freedom, media diversity, and the connection between media and democracy. She is a member of the Board of Jurors for the George Foster Peabody Awards, a member of the Academy of Motion Picture Arts and Sciences, and she serves on the advisory boards of the Berkeley School of Journalism and the University of Chicago's Harris School of Public Policy. She is a former board member of Media Impact Funders, the Center for Asian American Media, and Asian Americans/Pacific Islanders in Philanthropy. Ms. Im earned her Master’s in Public Policy from the Harris School at the University of Chicago, and her Bachelor’s in Government Studies from Smith College.