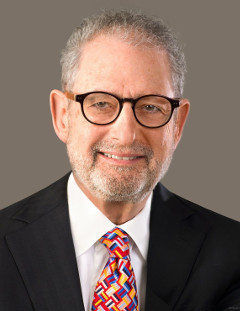 Robert A. Mandell was appointed to the CPB Board of Directors by President Donald Trump and confirmed by the Senate in March 2019.

He is a retired U.S. Ambassador to Luxembourg and currently serves on the boards of the Smithsonian Museum of Natural History and the Center for a New American Security in Washington, D.C., and Human Rights First in New York City.

Ambassador Mandell currently is a partner in Velocitas Venture, a medical device company, and ReactiveCore, a technology company. He previously was Chairman and Chief Executive Officer of The Greater Construction Corp. from 1998 until 2005 and served as Chairman Emeritus of Meritage Homes of Florida, Inc. until 2007.

He also has been involved in state and regional governments, including as chairman of the Florida Environmental Regulation Commission and chairman of the Orlando-Orange County Expressway Authority.

Additionally, Ambassador Mandell has served on the boards of Florida Hospital, a division of Adventist Health Systems; the Burnham Institute for Medical Research of La Jolla, Calif.; and the Vermont Studio Center. He has served as well on local and regional blue-ribbon panels and led a United Cerebral Palsy Capital Campaign that raised $6.5 million for a new facility serving more than 450 disabled children in Orlando. He previously was a National Cabinet Member of the Woodrow Wilson International Center for Scholars in Washington, D.C.

He was named to the President’s Export Council and was later appointed U.S. Ambassador to Luxembourg, where he served until 2015. He was the first ambassador in 60 years to be honored with induction into the Order of the Oak Crown for outstanding service to Luxembourg.

He earned a B.S. degree from the University of Florida in 1969 and a Juris Doctorate in 1972. He is an “AV” rated lawyer in Martindale-Hubbell legal list. In addition, he graduated from the Harvard Business School Owner/President Management (OPM) program in 2000.

Ambassador Mandell is married to Julie Walker Mandell and is father to four grown children.