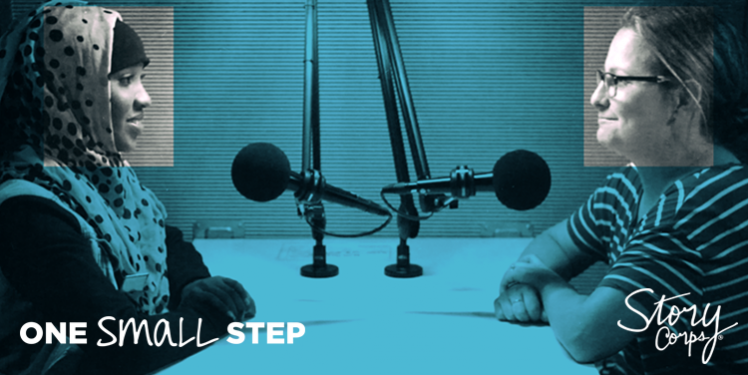 One Small Step, a StoryCorps initiative bringing strangers from opposite sides of the political spectrum together for face-to-face conversation, is gaining recognition as an antidote to increasing political polarization across the country.

The program, launched in 2018 with support from the Corporation for Public Broadcasting (CPB), was featured on the January 9 edition of CBS’ 60 Minutes. The project seeks to build political civility by connecting people of differing political viewpoints to share common ground

StoryCorps and One Small Step founder Dave Isay said people feel misunderstood and judged. "You know, nobody has ever, in the history of humanity ... changed their mind ... by being called an idiot or a moron or a snowflake," he told CBS' Norah O'Donnell. "But, you know, many minds have been changed by being listened to, by conversation, being told that they're loved."

The segment shows pastors Brenda Brown-Grooms and Nicole Unice meeting for a conversation in Richmond, Va. Though they are on different sides of the political spectrum, they connect over their shared purpose of helping people find their path and find their voice. By encouraging people to find common understanding, One Small Step helps people see those with opposing viewpoints in a different way.

CPB has continued support for this project, enabling StoryCorps to provide training, content, promotional materials, and outreach through public media stations such as VPM in Richmond and KMUW in Wichita, which leverage StoryCorps’ national brand to record interviews and produce content that is shared live, through local broadcast, online, or via social media. More than 1,000 conversations between strangers have been recorded so far.

One Small Step grew out of StoryCorps, the oral history project that Dave Isay founded in 2003. It has taped more than 600,000 Americans telling their stories – to become the largest single collection of human voices ever recorded. All recordings are stored at the Folklife Center at the Library of Congress, and NPR airs one each Friday on “Morning Edition.” The CPB-supported 2022 StoryCorps Mobile Tour is now in Tampa Bay, Fla. hosted by WUSF.