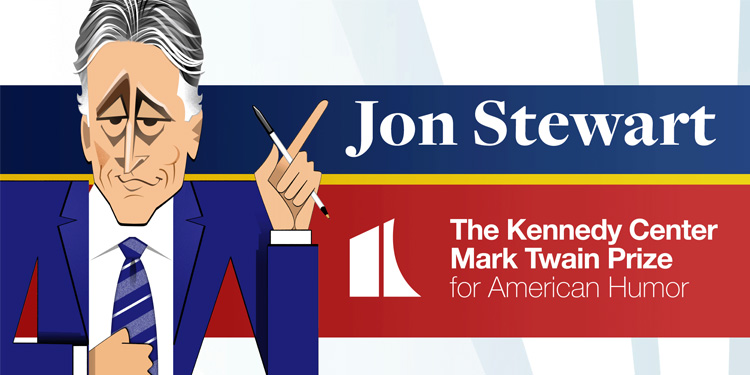 Following jokes about the masked audience and Twain himself, Stewart praised his fellow comedians and addressed the seriousness of the moment.

“Comedy survives every moment. … it’s not the woke police that’s going to be an existential threat to comedy. It’s not the Fresh Prince. It’s the crown prince. It’s not the fragility of audiences, it’s the fragility of leaders,” he said. “Comedy doesn’t change the world, but it’s a bellwether. We’re the banana peel in the coal mine. When a society is under threat, comedians are the ones who get sent away first. It’s just a reminder to people that democracy is under threat. Authoritarians are the threat to comedy, to art, to music, to thought, to poetry, to progress, to all those things.”

A 22-time Emmy winter, Jon Stewart is the 23rd recipient of The Kennedy Center Mark Twain Prize for American Humor, which recognizes individuals who have had an impact on American society in ways similar to the 19th-century humorist Samuel Clemens, better known as Mark Twain. The gala celebrated Stewart’s 16-year run as host and executive producer of Comedy Central’s “The Daily Show with Jon Stewart,” as well as his work on behalf of September 11 first responders and their families and America’s wounded veterans.

The PBS program was produced by WETA, the leading public broadcaster in the nation’s capital.

Public Radio Amps Up the Music this Juneteenth