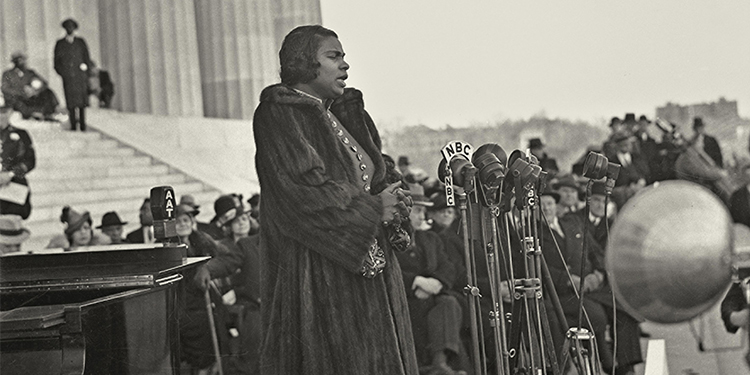 From national premieres of documentary films to interviews with local Black musicians on public radio, a wide range of programs will broadcast on air and stream online and on demand in February (check local listings).

On PBS and WORLD Channel

Marian Anderson: The Whole World in Her Hands, featuring rare interview recordings of the contralto, premieres at 9 p.m. February 8 on the PBS series American Masters and streaming on PBS.org and the PBS app. According to director Rita Coburn, this documentary features audio of Anderson discussing her personal experiences, allowing the viewer to explore history from her point of view.

Marian Anderson: The World in Her Hands

The American Diplomat, which tells the stories of African American U.S. Ambassadors Edward R. Dudley, Terence Todman and Carl Rowan, premieres on PBS’ American Experience at 9 p.m. on February 15. Directed by Leola Calzolai-Stewart, the film explores how the three men were asked to represent the best of American ideals abroad while facing discrimination at home, at the height of the civil rights movement in the United States.

Immediately following “The American Diplomat” is American Reckoning, a FRONTLINE collaboration with Retro Report, at 10 p.m. on February 15. This documentary looks at the civil rights era - the violence and resistance - through rare footage filmed more than 50 years ago in Natchez, Mississippi, and the still-unresolved killing of local NAACP leader Wharlest Jackson.

Jackson’s killing is included in Un(re)solved, a multiplatform investigation that tells the stories of African American lives cut short, and examines a federal effort to grapple with America’s legacy of racist killings through the Emmett Till Unsolved Civil Rights Crime Act. A collaboration among FRONTLINE, Northeastern University’s Civil Rights and Restorative Justice Project, StoryCorps and Ado Ato Pictures, Un(re)solved includes a web interactive, a podcast hosted by James Edwards and distributed by PRX, and installation exhibitions, currently on display at the Museum of African American History in Boston and at the DuSable Museum of African American History in Chicago.

Fannie Lou Hamer’s America, which tells the story of the Mississippi-born sharecropper who became a voting rights and women’s right activist in the 1960s, premieres at 9 p.m. ET on WORLD Channel, a multicast public television channel available on three-quarters of TV households. The America ReFramed special, from WORLD Channel, American Documentary and Black Public Media, is produced in part by Fannie Lou Hamer’s great-niece, Monica Land. The program is the centerpiece of WORLD Channel’s Black History Month broadcast and on-demand programming, including “Growing Up Black,” a two-part “Stories From the Stage” special airing February 21 and 28.

NPR opened its Black History Month series with the story behind Black History Month and why it’s celebrated in February and will feature coverage across its daily news magazines, Morning Edition and All Things Considered, along with their weekend versions. In addition, special programming will be featured on programs such as From The Top and It’s Been a Minute with Sam Sanders. NPR Music will showcase legacy artists in R&B, jazz, hip hop and gospel in a Tiny Desk series throughout the month.

In Philadelphia, WXPN will feature “Black Inspirations,” highlighting contemporary Black musicians and the albums that have inspired them, each weekday on The Weekday Show at 10:30 a.m. On the XPN Local Show, Rahman Wortman hosts a series, “Give Them Their Flowers” with Four Black local musicians talking about the music that inspired them and how Philly's Black music history has inspired them.

Jazz station WCLK in Atlanta will air an hourlong special recognizing the 50th Anniversary of “Truth Is On Its Way,” the groundbreaking album by poet Nikki Giovanni and New York Community Choir, at 7 p.m. February 26. The special edition of “S.O.U.L. of Jazz,” featuring an interview with Giovanni, is hosted by WCLK afternoon drive host Jamal Ahmad.

PBS’s online Black Culture Connection has curated articles and a playlist of streaming programming on PBS.org, including programs such as “The Murder of Emmett Till” and “The Black Church: This Is Our Story, This Is Our Song.” PBS Digital Studios has updated its Celebrating Black History YouTube playlist of Black history, culture, arts and politics from a range of PBS channels, including PBS Voices, a PBS Digital Studios channel dedicated to documenting our shared human journey and helping us better understand each other.

The American Archive of Public Broadcasting offers online exhibits Televising Black Politics in the Black Power Era: Black Journal and Soul! and Freedom Song: Interviews from Eyes on the Prize: America’s Civil Rights Years, 1954-1965, as well as special collections including episodes of WGBH’s Say Brother (1968-1997) and KUT’s In Black America, plus raw interviews from acclaimed PBS documentaries The Murder of Emmett Till, Freedom Riders, Jubilee Singers: Sacrifice and Glory, The Abolitionists, and Reconstruction (a 2004 American Experience documentary).

Top photo: Marian Anderson sings before an integrated audience of 75,000 at the Lincoln Memorial in 1939. Photo courtesy of World History Archive/Alamy Stock Photo