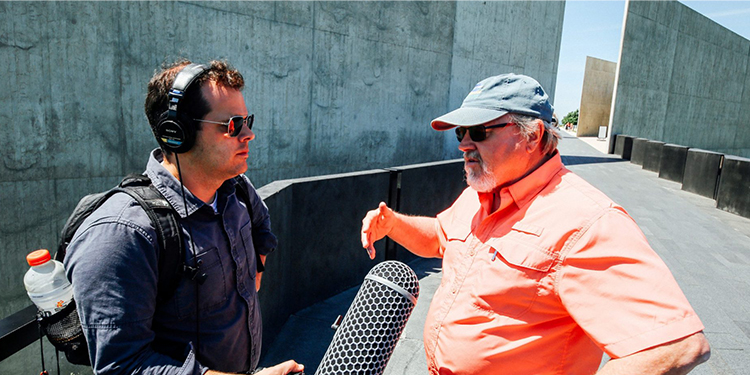 As the nation commemorates the 20th anniversary of the devastating terrorist attacks of September 11, 2001, public media coverage and programming will provide wide-ranging perspectives.

A centerpiece of NPR’s multiplatform coverage is Sacred Ground, a broadcast special on United Flight 93 (check local listings), reported by Tim Lambert, a radio journalist with WITF in Harrisburg whose family owned part of the land near Shanksville, PA, where the plane went down. Because of the courageous actions of the 40 passengers and crew aboard Flight 93, a planned attack on the U.S. Capitol was thwarted. A caretaker of the land until the Flight 93 National Memorial could be built, Lambert was involved in the recovery efforts and grew close to the family members of the people who died on the plane. Lambert, now WITF multimedia news director and “Morning Edition” local host, reported the special with NPR’s Scott Detrow, a former WITF colleague.

Starting on Labor Day, PBS NewsHour plans nine segments related to the anniversary, leading up to the September 11 ceremonies, which will be livestreamed online in coordination with NewsHour Weekend. NewsHour coverage includes perspectives from Gordon Feldt, whose brother died in Shanksville; Muslim Americans; first responders; a military chaplain; and teens from the Student Reporting Labs, who have grown up in a post-September 11 world.

FRONTLINE’s America After 9/11 (9 p.m. on Tuesday, September 7,  check local listings) explores how the terror attacks ushered in an era of fear, mistrust, and division in America and follows the compromises and consequences for American democracy through four presidencies, wars abroad, and ultimately insurrection at home. Filmmaker Michael Kirk is featured in a special episode of The FRONTLINE Dispatch podcast, available on Thursday, September 9, from GBH and PRX.

In addition, FRONTLINE is streaming 17 documentaries, curated from its archives, that chronicle the intelligence failures that preceded and followed the 9/11 attacks, the toll of the wars in Afghanistan and Iraq, the rise of ISIS and the lasting impact on America and the world. They include “The Man Who Knew,” a 2002 documentary about former FBI counterterrorism agent John O’Neill, who struggled to convince the FBI to pay attention to the threat posed by Al-Qaeda before he died when the twin towers fell, and In the Shadow of 9/11, which aired in August, about how seven men in Miami were indicted for the biggest alleged al-Qaeda plot since 9/11, despite having no weapons or connections to the terrorist organization.

Generation 9/11, a documentary following seven children whose mothers were pregnant with them when their fathers died on September 11, premiered on PBS August 31, and is streaming online and on the PBS Video app.

New York Public Media's WNYC and classical WQXR will combine live programming, archival material and new reporting in their anniversary coverage. WNYC will launch a series, “9/11 and the Rise of the 21st Century NYPD,” on Sunday, September 5. Brian Lehrer will host coverage of the official memorial ceremonies from 8:35 to 11 am on September 11, followed by “Blindspot: The Road to 9/11,” a two-hour radio documentary adapted from the nine-part podcast WNYC Studios co-produced with The History Channel. WQXR will air “We Shall All Be Changed: Musical Reflections on 9/11” at 7 pm on September 11, followed by a special audio broadcast of the Metropolitan Opera's "Verdi's Requiem: The Met Remembers 9/11." Separately, the Met concert will also air on PBS' "Great Performances," hosted by Misty Copeland, at 8 pm September 11 (check local listings).

Chief, a documentary about New York Fire Department First Deputy Fire Commissioner William M. Feehan, the highest-ranking and oldest FDNY member lost on September 11, premieres on New York City-area public television stations WLIW21, THIRTEEN and NJ PBS on September 9 and 10 before screening on September 11 at the Museum of the City of New York. The documentary was produced with assistance from AT&T, which is building and maintaining FirstNet, a nationwide broadband communications platform dedicated to first responders and the public safety community.

StoryCorps is releasing two CPB-funded animations from the September 11th Initiative, a partnership with the National September 11 Memorial & Museum, airing as interstitials on public television stations and posted on StoryCorps.org. September 12th is the story of Vaughn Allex, who was working the ticket counter at Dulles International Airport and felt responsible for the crash of American Airlines Flight 77 into the Pentagon because he let two of the hijackers board the plane. In Father Mychal's Blessing, Father Michael Duffy recalls delivering the homily for Father Mychal Judge, who was the first recorded fatality of the attacks on the World Trade Center.

WORLD Channel, the public television multicast channel airing in more than 70% of the country, is airing a Stories From the Stage special called Changed Forever 9/11. Three storytellers describe how they coped with grief and bias following the attacks. The program airs at 9:30 pm ET/8:30 CT on Monday, September 6.

On September 11, WORLD Channel will also rebroadcast Facing the Dragon, a documentary following two Afghan women from 2013 to 2017 as they have to choose between motherhood and their commitment to reform in Afghanistan. The Gracie-winning film is also streaming on WorldChannel.org.

Latino USA, airing the weekend of September 11 (check public radio listings) and as a podcast on September 10, will explore how 9/11 has affected U.S. immigration policy and changed attitudes toward immigrants in the 21st century, including the creation of the U.S. Department of Homeland Security (DHS) and the U.S. Immigration and Customs Enforcement agency (ICE), the effects of Real ID legislation efforts on undocumented immigrants, and the history of the DREAM Act.

The American Archive of Public Broadcasting has posted a 9/11 Special Coverage collection of 68 TV and radio programs covering the terrorist attacks, the aftermath, and the following War on Terror. The collection includes the September 11, 2001, broadcasts of PBS NewsHour with Jim Lehrer and KAKM’s Talk of Alaska and other coverage in the chaotic days following the attacks; the September 12 episode of WNET’s New York Voices, with a panel discussion hosted by Bill Moyers; previous anniversary specials; and 9/11 prayer services and interviews with diverse religious leaders from ideastream in Cleveland.

PBS LearningMedia offers lesson plans and resources for teaching with primary sources from the Library of Congress, including its collection of newspapers and a StoryCorps interview with an NYPD police officer at the World Trade Center, plus interactive timelines from the National September 11 Memorial and Museum.