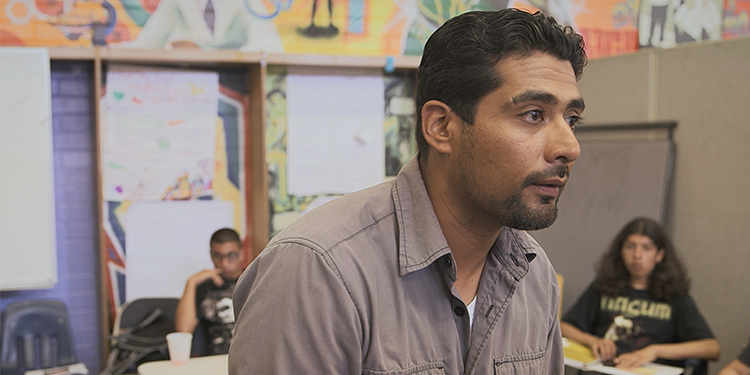 VOCES, a four-documentary series showcasing the best of Latino arts, culture, and history, launches on September 13 on PBS with “Raúl Juliá: The World’s a Stage” (9 pm, check local listings). Directed by Ben DeJesus, the documentary is a biography of the acclaimed actor, a Puerto Rico native who performed Shakespeare at Joseph Papp’s The Public Theater in New York and went onto acclaim on Broadway and in films before his death at age 54. The special presentation of American Masters and VOCES is a co-production of ITVS, NGL Studios, Diamante Content, and Latino Public Broadcasting in association with American Masters Pictures.

VOCES, produced by Latino Public Broadcasting with CPB support and presented by PBS SoCal, continues to air Fridays on PBS through October 4:

Also on PBS, “P.O.V: América” (Monday, 10 pm, October 7, check local listings) follows the journey of a surf shop employee and boardwalk performer who returns to his hometown of Colima, Mexico, to care for his brothers. “The Hispanic Heritage Awards” (10 pm, October 11, check local listings), presented by the Hispanic Heritage Foundation, is the country’s highest tribute to Latinos by Latinos and includes performances and appearances by celebrated Hispanic artists.

WORLD Channel, a public television multicast channel available to two-thirds of TV households, is airing and streaming a collection of programs exploring the Latino identity from a racial and cultural perspective, and inviting comment on social media with the hashtag #WORLDxHHM. The documentary series America ReFramed premiered “Councilwoman” on September 3, following Carmen Castillo, a hotel housekeeper from the Dominican Republic who wins a seat on the city council in Providence, Rhode Island. “Stories from the Stage” (9:30 pm ET/8:30 CT Mondays) features Latin American storytellers each week through October 14: Rosanna Salcedo discovers that friendship can cross all kinds of borders; Gastor Almonte goes above and beyond to satisfy his wife’s sweet cravings; Ana Hebra Flaster describes her last night at home before leaving Cuba; Claritza Abreu prepares for her first job in the US by reading the phone book; and Andy Vargas runs for office with the support of his whole family.

NPR’s Turning the Tables series, which is featured in “Morning Edition,” “All Things Considered”  and online, will focus on Celia Cruz, the queen of Salsa, during the week of September 16-20, with a special playlist by Alt.Latino contributor Stefanie Fernandez.