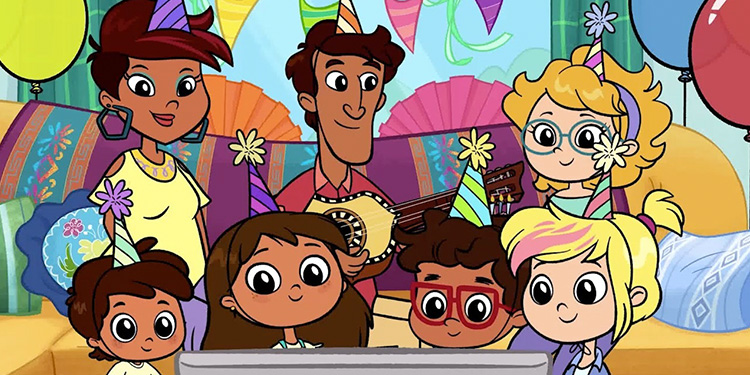 Rosie’s Rules stars Rosie Fuentes, a bilingual girl growing up in a blended, multicultural family in suburban Texas. The preschool series, launched with CPB support, follows Rosie as she figures out how things work, from the mail service to extended families, and how she fits into society. The series, available in English and Spanish, will be accompanied by interactive games on pbskids.org and the free PBS KIDS Games app, along with learning and parent resources on PBS KIDS for Parents and PBS LearningMedia.

A slate of new and encore programs will air on PBS (times may vary; check local listings) and stream on PBS.org and the PBS Video app for Hispanic Heritage Month and through October. In addition, PBS KIDS has developed a Hispanic Heritage Month playlist on YouTube, featuring  videos from “Alma’s Way,” “Oh Noah!” and other favorites. Premieres include:

The Last Out - Official Trailer | HD

The Last Out, a documentary following three Cuban baseball players trying to make it in the U.S., premieres on POV at 10 ET/9 CT on October 3. The film, co-presented by Latino Public Broadcasting, is the second half of a Latino baseball doubleheader, following an encore presentation of Roberto Clemente on American Experience at 9 pm ET/8CT.

Los Lobos will receive the Hispanic Heritage Arts Award at the 35th Annual Hispanic Heritage Awards, 9 pm ET/8 CT on September 30. The program by and for Latinos also honors Daddy Yankee with the Legend Award; Marvel Studios’ Victoria Alonso with the Vision Award; Alejandro Velez and Mikil Arora of Back to the Roots with the Entrepreneurship Award; and first Latina U.S. Air Force pilot Olga Custodio with the STEM Award.

La Otra Mirada, a dramatic series from Spain, makes its U.S. television debut on September 15, airing on Thursdays at 10 pm ET/9 CT. Set in 1920s Seville, a woman with a mysterious past flees to a young girls' academy with a secret goal related to the academy itself.

¡Dia de los Muertos! A Subterranean Celebration, a concert celebrating the Mexican Day of the Dead, premieres at 9 pm ET/8 CT on October 28. Taped before a live audience in The Caverns, a subterranean amphitheater in Middle Tennessee, the concert features Los Lobos, the salsa-rap-reggae-funk of Ozomatli and the all-female mariachi band Flor de Toloache. The special also includes short vignettes explaining the meaning, origins, and importance of this holiday. ¡Dia de los Muertos! is a Todd Jarrell Production in association with PBS and Latino Public Broadcasting. 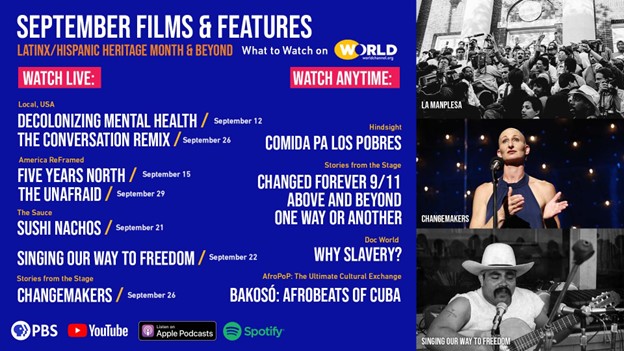 WORLD Channel, the CPB-supported public television multicast channel airing in more than 70% of TV households, offers a viewers’ guide of Hispanic Heritage Month programming, including rebroadcasts of the documentaries Five Years North and The Unafraid on America ReFramed and streaming films such as Comida Pa Los Pobres, a short film about food insecurity in Puerto Rico, produced as part of the CPB-supported “Hindsight” collaborative project in 2021. New programs include:

La Manplesa: An Uprising Remembered,  looks back at the 1991 protests in the Mount Pleasant neighborhood of Washington, D.C., after police shot a young Salvadoran man. The documentary airs on America ReFramed October 6.

Stories From the Stage: Growing Up Latina, features stories by three Latinas navigating identity and intersectionality, on October 3. 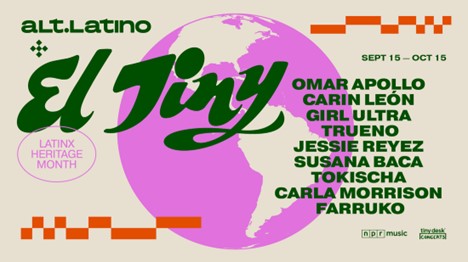 Other Highlights and Ongoing Programs

StoryCorps features an online Hispanic Heritage Month story collection and information about its Historias Initiative, which has collected Latino stories since 2009.

The Moth, the storytelling organization behind The Moth Radio Hour, offers a Hispanic Heritage Month playlist of stories from the Latin American diaspora.

Radio Bilingüe, along with Futuro Media’s Latino USA, NPR’s Alt.Latino and Radio Ambulante feature Latino stories all year long. The Spanish language podcast Radio Ambulante, in fact, kicks off its 12th season (and seventh as part of NPR) on September 20 with Listening Clubs, both in person and virtual, across Latin America.