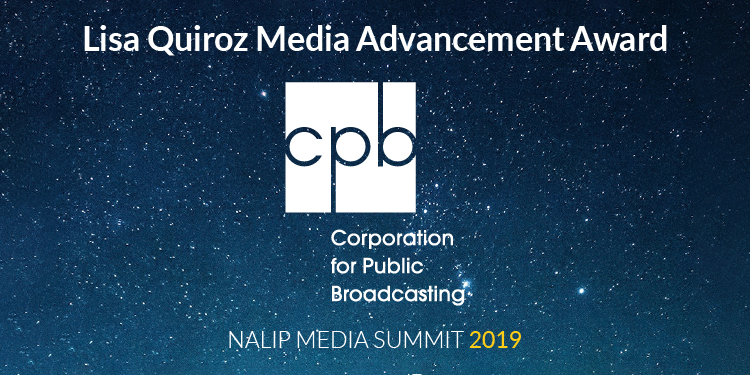 CPB honored with Lisa Quiroz Award for its commitment to diversity

Los Angeles (July 25, 2019) - The National Association of Latino Independent Producers (NALIP) will honor the Corporation for Public Broadcasting (CPB) at the 2019 NALIP Media Summit for their efforts in fostering the development of Latinx and diverse communities in media.

In celebration of its 20th anniversary, NALIP will award CPB the Lisa Quiroz Media Advancement Award for its work championing diverse programs and services that inform, educate and enrich the American people. CPB’s investments exemplify public media’s commitment to collaboration, innovation, and inclusion. Named after the late Lisa Quiroz, this award aims to recognize the work of those who demonstrate a commitment to inclusion in the media industry.

Sylvia Bugg, Vice President, Diversity and Television Content, will accept this prestigious award on behalf of CPB at the 2019 Latino Media Awards and Gala during the 2019 NALIP Media Summit.

“It is an honor to have CPB’s commitment to diversity recognized by communities we serve every day. Telling America’s stories – through the lens of many perspectives – is a vital part of public media’s mission,” said Bugg.

The NALIP Media Summit, presented by HBO, will take place at the Ray Dolby Ballroom at Hollywood & Highland from July 25th - 28th. The Summit is the keystone event of NALIP, which champions the Latinx media community and advances the next generation of content creators.

The National Association of Latino Independent Producers (NALIP) is a national membership organization that addresses the professional needs of Latinx content creators. NALIP stands as the premiere Latino media organization, addressing for 20 years the most underrepresented and the largest ethnic minority in the country. NALIP’s mission is to discover, promote and inspire Latinx content creators and diverse voices across all media platforms. NALIP serves the needs of diverse content creators including, producers, performers, writers, directors, and industry professionals.

The Corporation for Public Broadcasting (CPB), a private, nonprofit corporation created by Congress in 1967, is the steward of the federal government’s investment in public broadcasting. It helps support the operations of more than 1,500 locally owned and operated public television and radio stations nationwide. CPB is also the largest single source of funding for research, technology, and program development for public radio, television, and related online services. For more information, visit cpb.org, follow us on Twitter @CPBmedia, Facebook and LinkedIn and subscribe for other updates.