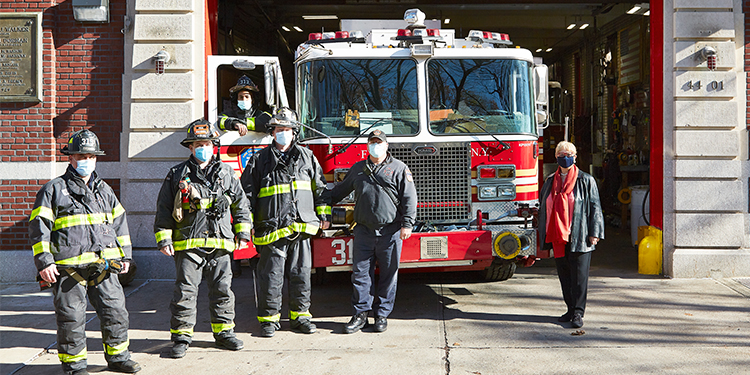 Chef Lidia Bastianich zooms in for virtual visits with hospital workers, police officers and firefighters across the country in “Lidia Celebrates America: A Salute to First Responders,” premiering at 10 pm on Friday, February 12, on PBS (check local listings) and streaming on the PBS app,  PBS.org and the PBS YouTube and Facebook pages.

Award-winning chef Bastianch has explored the country to tell America’s stories through food with her “Lidia Celebrates America” specials since 2011. Over the past decade, she has traveled the country to share stories, cook and break bread with veterans, farmers, artisans and others. With public media partnering with local governments and first responders providing other emergency services across the country, Bastianich started 2020 planning to visit some of them to tell their stories.

“We began to research first responders’ stories back in January of 2020 before the pandemic hit. Before I knew it, New York City was shutting down in mid-March as New York City became an epicenter of the virus, and our plans began to change drastically,” Bastianich said. “Everything seemed simply surreal as the original stories were replaced by new first responder stories that were happening closer to home, and then eventually in other areas of our country affected by the pandemic,” she said. “It was like nothing I could have imagined.”

The “Salute to First Responders” special features Bastianich meeting – through video chats or masked, socially distanced visits – first responders across the country, including:

Bastianich also visits Operation Gratitude, an organization that sends care packages to U.S.  military members overseas and to first responders here in the United States. Bastianich encourages viewers to recognize our service members and first responders by giving back in some way.