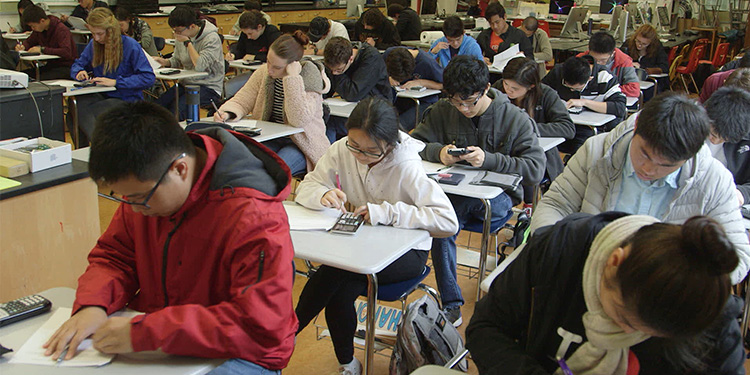 Students at Lowell High in San Francisco grapple with an AP Physics midterm and high-stakes college admissions in ‘Try Harder!’ a film by Debbie Lum. Photo by Lou Nakasako.

(Check local listings for all PBS shows; also streaming on PBS.org and on the PBS app)

Try Harder!, airing on Independent Lens on May 2 (rebroadcasting on WORLD Channel on May 4), explores the high pressure, high stakes college admission process at San Francisco’s Lowell High, which has a majority Asian student body. Filmmaker Debbie Lum follows several students over the school year as they aim high and work hard -- and often get turned down or waitlisted by their dream schools.

American Masters: Waterman — Duke: Ambassador of Aloha, airing on American Masters on May 10 (rebroadcasting on WORLD Channel on May 14), chronicles the life of five-time Olympic swimming medalist and Hawai’ian surfing icon Duke Kahanamoku, the “father of modern surfing.” The documentary explores his journey as a racial pioneer, surfing ambassador and life-saver and the obstacles he conquered both within and outside the sporting world.

Plague at the Golden Gate, airing on American Experience on May 24 (rebroadcasting on WORLD Channel on May 28), shows how the Chinese community in San Francisco was scapegoated as the source of a bubonic plague outbreak in 1900, before the city’s new federal public health officer, Rupert Blue, traced the cause to flea-infested rats. Producer and director Li-Shin Yu led an Asian American film team, including narrator Lea Salonga, to tell a story with eerie parallels to today’s global pandemic.

Rising Against Asian Hate: One Day in March, airing on May 30, explores the fight against Asian American hate following the March 2021 mass shootings at three spas in Atlanta and how this critical moment of racial reckoning sheds light on the struggles, triumphs, and achievements of AAPI communities.

Included in its May viewer’s guide:

Healer Stones of Kapaemahu, airing on May 2, tells the story behind the four stones placed on Waikiki Beach as a tribute to legendary Māhū, people of dual male and female spirit, who brought the healing arts from Tahiti to Hawai’i and used their spiritual power to cure disease. The film is the Season 11 finale of Pacific Heartbeat, an anthology series presented by the CPB-supported Pacific Islanders in Communications and PBS Hawai’i. All five Season 11 films are airing on individual PBS stations in May (check local listings) and streaming at WorldChannel.org.

Geographies of Kinship, on America: ReFramed on May 19, follows four adult adoptees returning to their South Korean birthplace, where they learn more about the rise of the country’s global adoption program.

Asian Voices, airing on Stories From the Stage on May 23, features Asian storytellers addressing the richness and variety of the Asian American experience.

Chinatown Rising, on America ReFramed May 26, uses never-before-seen archival footage and photographs from the 1960s to the 1980s to explore the political rise of San Francisco Chinese Americans, who fought for bilingual education, tenants’ rights, affordable housing, and AAPI studies in colleges even as the neighborhood fought gentrification.

CAAMFest, a celebration of Asian and Asian American stories from the Center for Asian American Media (CAAM), celebrates its 40th anniversary with virtual and in-person screenings in San Francisco and Oakland from May 12 to 22. Opening CAAMFest this year is Free Chol Soo Lee, about a Korean immigrant wrongly convicted of murder who was set free after a massive public campaign. The ITVS co-production was made in association with CAAM, with funding from the Corporation for Public Broadcasting.

NPR covers Asians and Asian American topics, including the origins of Asian Pacific American Heritage Month, across its programs. May programming (check local listings) will include:

Short Wave, hosted by Emily Kwong, talks to science comedian Kasha Patel about how blending science and comedy can break stereotypes and drop a little science-backed knowledge into people's everyday lives. Kwong also talks to chef and food writer J. Kenji López-Alt, who takes joy in a scientific approach to his cooking. Kwong will make velvet chicken and sugar snap peas using the velveting technique from López-Alt’s cookbook, “The Wok.” The episode will break down velveting, the process of coating protein in egg whites, wine, and cornstarch to maximize tenderness in high-heat cooking.

Code Switch will explore Utang na Loob, the Filipino concept that family members have eternal debts to one another. Malaka Gharib of NPR's global health team will explore how that debt manifests, and how it butts up against "American" values of independence and self-reliance.

Throughline will explore the history of Chinese characters and consider the role of language in creating a nation. The history program will also take listeners to Taiwan, tracking its slow march from a sleepy backwater to economic powerhouse.

In addition, Louisville Public Media and Nevada Public Radio in Las Vegas have produced podcasts focused on local Asian Americans, which are available on demand.

Louisville Public Media’s Where Y’all Really From, on Asian Americans and Pacific Islanders in Kentucky, wrapped up a 12-episode first season with a surprise bonus episode in December. Hosts Dan Wu and Charlene Buckles are working on a second season of the podcast, part of the Louisville Public Media Podcast Incubator.

Nevada Public Radio’s Exit Spring Mountain, a podcast about Asian-American and Pacific Islander communities in Southern Nevada, wrapped its 10-episode podcast in March, examining the impact of history, politics, and the economy on AAPI community members.

Asian American Stories of Resilience and Beyond, a series of seven short films by Asian American creators that move beyond the pandemic and reflect the complexities of AAPI experiences, starts May 3 with a premiere every Tuesday on PBS and WORLD Channel's YouTube. First up is “On All Fronts,” filmmaker Joua Lee Grande’s conversations with the Moss family, a Black-Indonesian family in Minneapolis addressing anti-Asian hate and the murder of George Floyd. The films were produced in partnership with Asian American Documentary Network (A-Doc) and presented in partnership with CAAM.

Historian’s Take, a history show from PBS Digital Studios that launched on April 11, includes explanations and conversations about pop culture to add historical context and perspective. A partnership with Plum Studio and CAAM, “Historian’s Take” is hosted by Dr. Danielle Bainbridge and co-hosted by Dr. Adrian De Leon and Dolly Li, with episodes such as How Black and Asian Audiences Found Justice in 1970s Films, unpacking Black Kung Fu films of the time.

StoryCorps has compiled a collection of AAPI Voices in its online archive of conversations, including Shigeru Yabu, who told his story of being interned during World War II at Heart Mountain Relocation Center in Cody, WY, and how a magpie he adopted at the internment camp lifted the spirits of the internees.